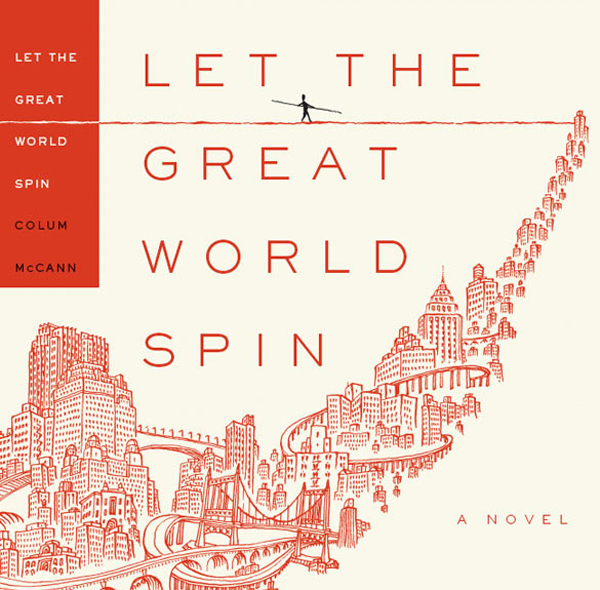 It’s been three years since I last let myself read fiction. In these years of study and transformation, there have always been factual gaps that needed filling, lacunes in knowledge, crevasses into which curiosity swelled, all-consuming. Narrative felt like an impermissible indulgence, empty calories, dangerously unproductive. Countless times in the last year I browsed the tables at bookstores only to demur, to put myself off with a quiet promise of “December,” as if that month would be the break fast of fiction, a buffet of stories with world enough and time to read them.

As soon as I heard the subject matter, my first choice to dip my toe back in was obvious: Colum McCann’s Let the Great World Spin. The book’s impetus is the famous 1974 tightrope walk by Philippe Petit between the twin towers of the World Trade Center, one hundred and ten stories above the ground. A magical, subversive, absurd act of transcendence, arrogance, and grace — Petit’s walk has captivated me from the first moment I knew about it. Any work similarly inspired by this exquisite moment had to be my kind of book: joyful, at least in some measure. 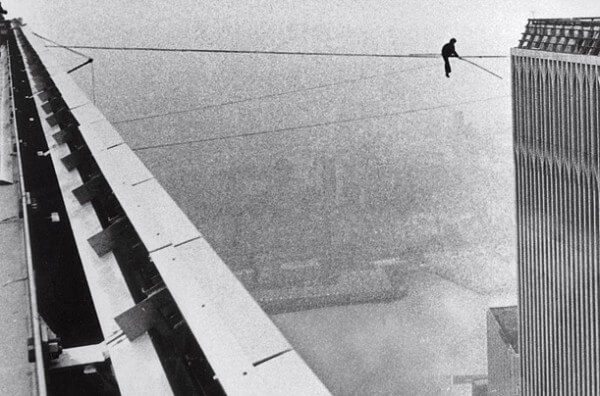 In reality, the walk is only a minor player in the book, and Petit is effaced by his function and by characters far more emotionally grounded and present. Let the Great World Spin is really about their mundane poetry, their strange connections, their peculiar urban unity of grit and joy and loss. But the walk runs like a thread through the book, tugging a reader (sometimes reluctantly) into the repeated introductions of new narratives, cold loose ends that spark and warm as they loop back into familiar territory. I wish the walk itself was more powerfully entwined in the lives of the characters in each individual vignette. And I wish we did not know whether or not the walker would fall. But these are minor quibbles in an adept journey.

I won’t spoil the story for anyone who might like to read it. But I will say what I am most struck by is the twin impulse towards joy in both Petit and McCann. Petit’s motivation was transcendence, even as a consequence of transgression. From the moment he first encountered them, he saw the towers as an opportunity to create art, to give not just New York but the whole world a momentary gift of joy through the stretching of our concept of what is possible in the world. They were a joyful canvas, those towers, a base on which to layer joy upon joy, by taking a stroll in the sky and not falling out of it. I can only think of a handful of acts that are comparable in the way they transformed our emotional sense of possibility. First transits, such as the walk on the moon, or first discoveries, such as of electricity, telephony, and flight, come to mind. But the analogy is imperfect. Those discoveries were linear demarcations of befores and afters. They expanded possibility in a permanent way, heralding irrevocable change. Petit’s walk was transient because it was confined to one man’s extraordinary ability. It expanded the world of human potential, then contracted it again. It bore no actual relevance to anyone else’s daily lives, and yet, magical thinkers that we are, it captivates us, even those of us like me who were barely a germ of an idea in two strangers’ brains at the time of its occurrence.

This timeless magic makes it the ideal catalyst for McCann’s sort of joy, which is joy in redemption. Petit’s act of creation, though it predated 9/11 by 27 years, seems the ideal antidote to the towers’ destruction. Aesthetically, Petit’s climactic moment is one of rising, hovering, and dancing, of lightness, buoyancy, and air. The towers denouement is falling, crumbling, and burning, fire and ash, earth and bone. The image of Petit’s unlikely defiance of gravity burns in sharp contrast to the towers equally unlikely fall. Chronology is no matter, as aesthetics of joy can be permanent in our souls.

Of course, the real redemption is in the art that juxtaposes the two, that offers to replace this pitted hole in our world with a new image. This is McCann’s task, as he observes in the reader’s guide that accompanies the paperback edition:

But stories are there to be told, and each story changes with the telling. Time changes them. Logic changes them. Grammar changes them. History changes them. Each story is shifted sideways by each day that unfolds. Nothing ends. The only thing that matters, as Faulkner once put it, is the human heart in conflict with itself. At the heart of all this is the possibility, or desire, to create a piece of art that talks to the human instinct for recovery and joy.

I love the confluence at the end of this statement — between instinct, humanity, redemption, and joy. A central premise of my thesis is that joy is fundamentally human, an instinctual gift of evolution that rewards our struggles and propels us forward with the promise of its rediscovery. By this logic joy is also directly related to the survival instinct. We exist to seek joy, and we strive to continue to exist so we can seek more of it. Joy is an essential motivator, not just for creation, but for life itself.

Petit’s walk was an affirmation of the possibility that joy could come of out nowhere, on clear dull day, and transform us. McCann’s book, for me, is a testament to the persistence of that joy and its relentless tendency towards renewal.

Get Let the Great World Spin on Amazon.
Read more about it on the author’s site.
See Man on Wire, the documentary about Philippe Petit’s 1974 walk. 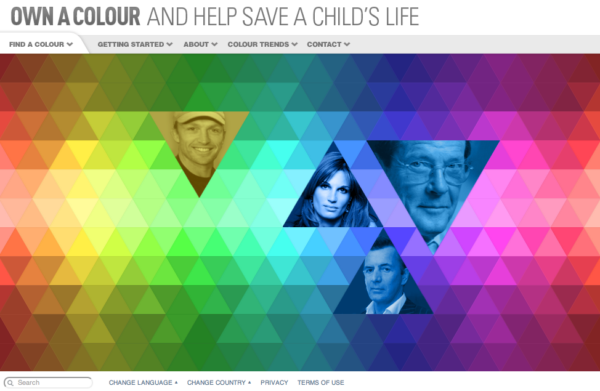 A giant bubble machine + links for your weekend