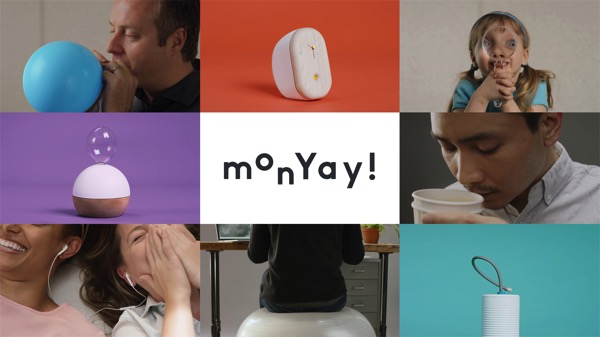 For the last few weeks, a team of designers has been hard at work trying to find ways to bring more joy into the dreariest day of the week. And today, voila, we present you with MonYay! A series of ideas to bring more joy to your Mondays. With this trio of objects and apps, our goal was to change the mindset around Monday, create joyful new habits, and uncover moments of joy we might forget to notice otherwise. Our hope was that Monday might become something to look forward, or even celebrate!

The segment is live on Studio 360: you can listen there and hear more about our process and the three designs. And you can read on for more about each of the ideas. You can also click over to the project site for lots more detail about the concepts and our work in bringing them to life.

Before I dive into the ideas, though, I want to say a little bit about the team that worked on this, because I’m consistently in awe of the people I get to work with at IDEO. You know when you work with people who do amazing things you know you could never do? That’s what this was like for me. There were four us: Karin Soukup, Erika Lee, Top Tulyathorn, and me. Karin is a communications designer who has a deep background in designing for emotion (check out her 11:11 project); she led the project with an incredible fluidity, working between research, content, graphics, digital, film. Maybe there’s something she can’t do, but if so I haven’t seen it. Erika, also a communications designer, is a pint-sized ball of energy who really brought the joy into the day-to-day of this project and its aesthetic with her ingenuity and joie de vivre. Top is an environments designer, but for this project, he was a magician, creating the forms and physical prototypes for each of the designs. As many of you know, I’ve been working on Aesthetics of Joy a long time on my own, and it was a revelation to get to work with three people who brought new ideas and perspectives to the work, both challenging and inspiring me. It was beyond a joy to get to do this work with this team!

And now, for a new Monday…

Lolzzz: An alarm clock that opens your eyes to joy

When we landed on Monday as the thing we were going to redesign, we started to think about moments within Monday that needed redesigning. The alarm clock was a no-brainer. After a weekend of sleeping in, there’s nothing worse than the alarm clock’s blaring, beeping insistence that the week is beginning. Redesigning the alarm clock for us is a way to get your day (and week) off on the right foot.

Lolzzz wakes you up with a child’s giggle instead of an alarm. If that sounds weird, you should try it for yourself. You can download the laughter track here, and install it as an alarm for your iPhone or Android. Laughter is a truly contagious sound. We have a visceral reaction to laughter that primes us to be in a good mood. So we thought, what kind of day would you have if you started it with laughter? 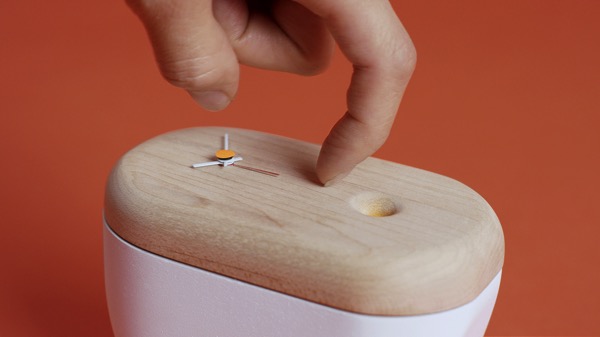 The team had the idea to make the clock really look like it was laughing, and worked hard on the form to get it to rock back when it goes off like a kid having a good belly laugh. This led to some fun interactions. Tickle the clock to make it laugh harder. Set the clock back upright to turn it off. 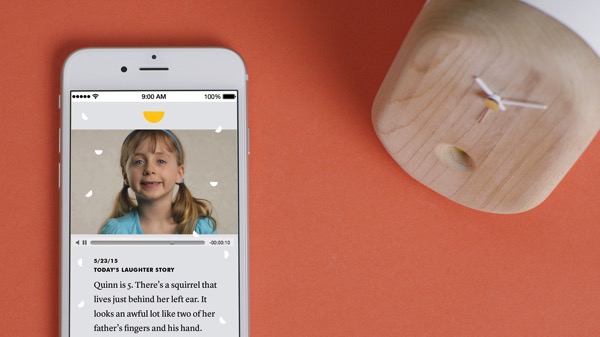 One of our test giggles (yes, we had test giggles!) was of a kid being tickled. We found that it made people smile when they heard it, and then smile again when they heard the story behind the laughter. This gave us the idea to have a different laugh every week, changing on Monday, and to have the story of the laugh sent via email timed to the Monday morning commute. (If you commute by transit, you’ll have something to read on your ride. If you commute by car, you’ll have something to take the pain away when you arrive. And if you commute by bike, well, you’re probably pretty happy already 😉 You could even imagine a website where you could even submit your laughter to be the Lolzzz wake up sound for the week.

Sincerely: A new ritual to transition into the week 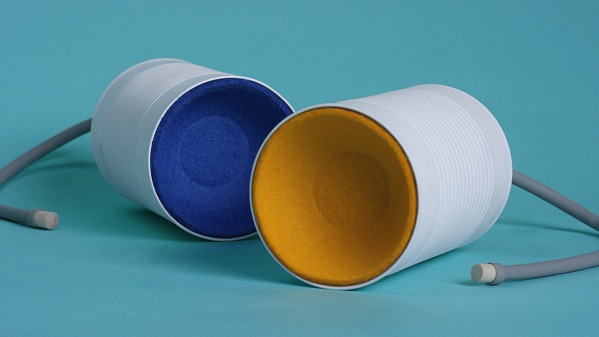 From the beginning, Karin was really interested in the idea of anticipation — is Monday really that bad, or is it just that our dread of Monday makes it feel worse than it actually is? She challenged us to think about ways we could make something that you might look forward to on Monday.

This led us to Sincerely, a ritual that starts your week off with a dose of gratitude. The premise is simple: on Sunday night, record a Thank You message to someone and send it their way. They’ll start their week off with a burst of joy, and when they respond, you get a burst in return. 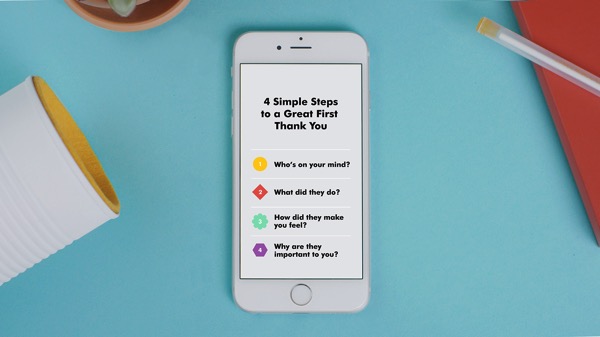 We were really interested in gratitude and creating an opportunity to connect people to each other. The idea of a virtuous circle seems really powerful. We know that social connection is one of the most potent sources of joy in people’s lives, and we wanted to explore ways to use the end of the week as a time to forge that connection. The other thing about gratitude, which we talk about in the piece, is that it focuses you on what you have, in a time when you tend to be thinking about what you don’t have. Sunday nights are all about scarcity—the weekend is literally running out, and it’s easy to fixate on that. But making time to share a thank you changes your focus onto something you do have, and it puts you in a mindset of abundance instead.

You can try out Sincerely by using our initial prototype to send your own message of gratitude.

The forms for Sincerely were inspired by the tin-can-and-string phones you may have used as a kid. Sure, we could’ve just made an app. But if we want this to become a ritual, then it makes sense to have an object devoted to it. You record your message into the can, and send through the Sincerely app (which also offers prompts on how to give a great thank you).

When you have a new thank you message, the tail on the can “wags.” We were inspired, no surprise here, by the joyful movement that is a dog’s tail wagging. It just never fails to make people smile!

PopUp and Notifly: A new kind of calendar to liberate your weekdays 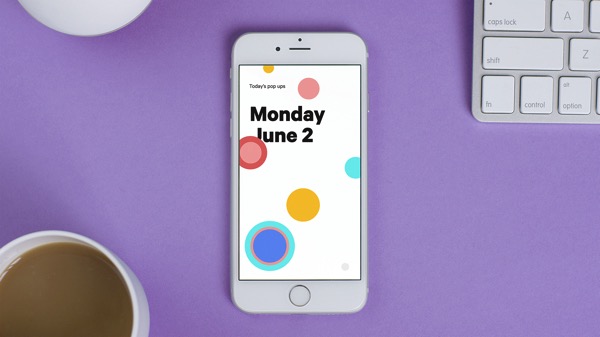 PopUp is a calendar that surfaces hidden moments of joy in your day. It reads your calendar, and looks for possible opportunities for joy, such as a new person you might be meeting, a beautiful view near the restaurant where you’re eating dinner, or a joyful happening like a solar eclipse. Each event is a bubble, color-coded based on the kinds of joyful moments you might have at each meeting. You can tap each one to learn more about why that event might be joyful, and the science behind it. And at the end of the day, you get to pop all the bubbles!

PopUp comes with the object above, called Notifly. I know I’m not supposed to play favorites but I can’t lie—if I could have only one of these things in my Monday, it would be Notifly. It’s basically a calendar notification device that sits on your desk and lets you know when you have a meeting. And it does that by blowing a bubble. 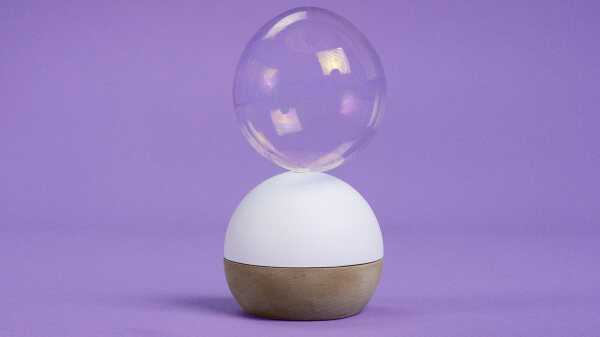 This idea may sound silly. Bubbles don’t seem to have a place in a serious setting like an office. But we deal with so much visual and auditory junk in our lives, and especially at the office. We take for granted that something should beep at us when we have a meeting, but why shouldn’t it do something more joyful instead? Why do all the things in our lives have to shout at us to get our attention? Why can’t they do something playful instead?

Our hope with Notifly, as with many of these objects, is that by changing the way Monday looks and feels, we might be able to change how we feel about it. Please check out the site, as there’s much more about each of the ideas and our thinking behind them. We would love to hear your thoughts and comments!

I shared a bit about the team above, but I also wanted to say that we were helped, a lot, by the whole IDEO NY studio and some outside the NY studio, especially Annette Ferrara and Anna Moore Silverstein, who helped us figure out how to do a collaboration like this; Katy Newton, who helped with video and production; Ben Swire, who put the joy in our writing, and gave us our muse, his daughter Quinn, whose distinctive giggle makes our Lolzzz clock what it is; Dario Buzzini, Mel van Londen, and Joseph Lim, who created our microsite and Sincerely prototype and worked around all the technical hurdles to get these things to work; Chris Milne, who programmed the Arduino in the Sincerely prototype; John Robichau and Sam Haymon, who found us inspiring people to chat with to inform our work (and double thanks to Sam for production help!); Michael-John Pierce for helping us jump through assorted hoops to work with talented collaborators such as video production wizards One Thousand Percent, animators Sander van Dijk and Candice Aquino, and fabricator Yen Gary Hou; Ashlea Powell, Debbe Stern, Fred Dust, and Roshi Givechi for providing wise guidance along the way; Kiley Reid and Hadley Lord, models extraordinaire; Dan Wandrey, who with Chris Milne helped with emergency late-night bubble-blowing technology; Diana Rhoten, who shared with us her dog Phife and his wagging tail; Loren Flaherty for bringing us a giant sprinkle cookie right when we needed it; and the whole studio who helped with naming, ideas, and moral support. A lot of love from a lot of people went into this, so if your next Monday is a MonYay, you know who to send your Sincerely messages to!

Words that make you joyful 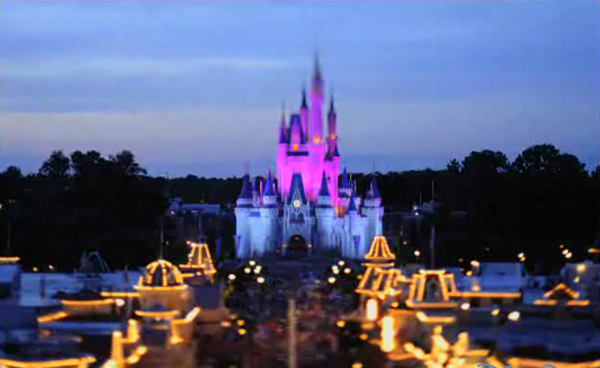