{the joy of} Island culture 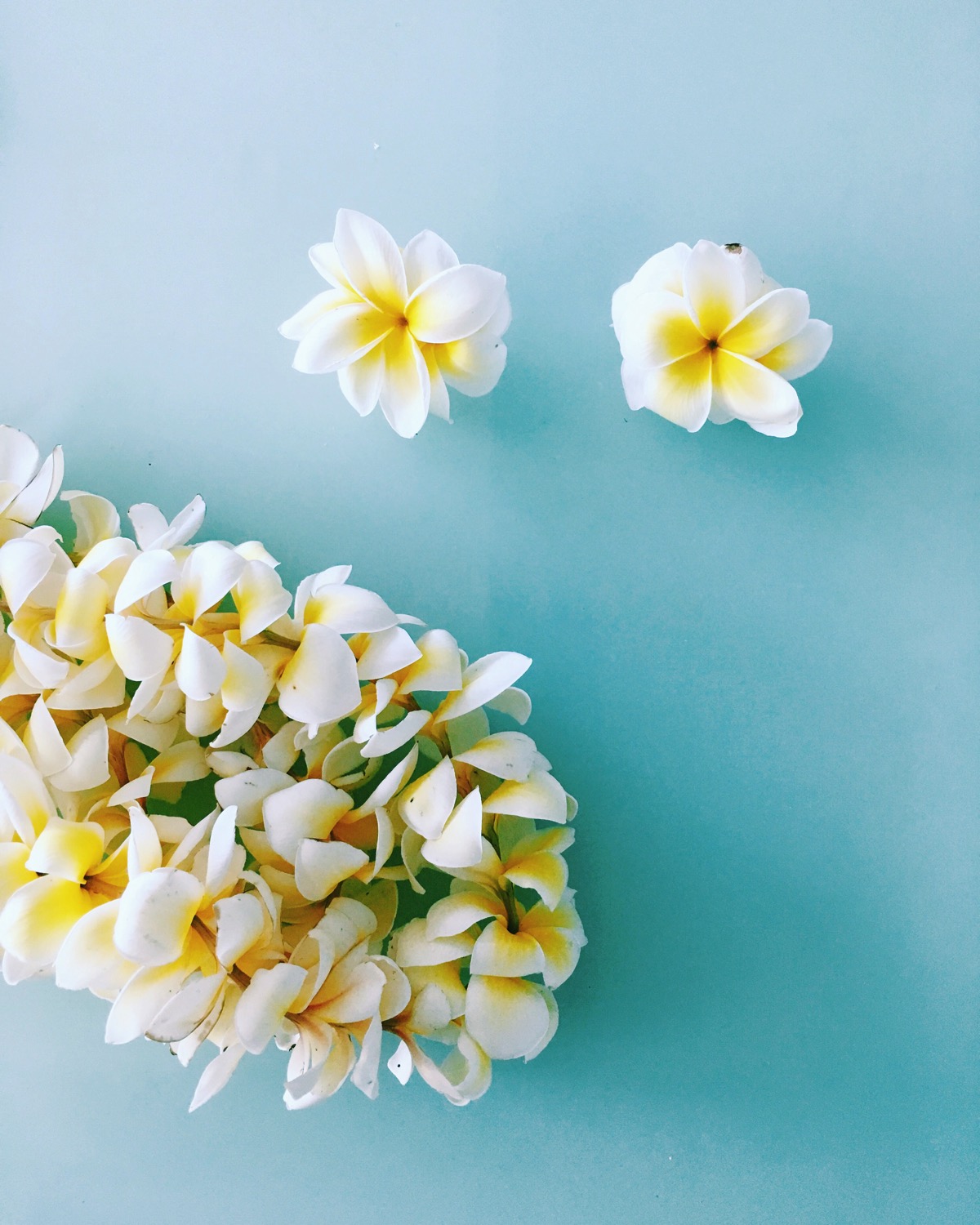 When Kara showed up to teach me hula, I almost missed her. Barely five feet tall and sixteen years old, she was not exactly what I pictured when I set up the lesson. But once we got upstairs to the apartment we’re staying in, she was all business. Out of her bag came a large tupperware box filled with yellow-centered plumeria flowers (harvested, show told me, from her grandma’s neighbor’s tree) and two five-inch long needles. As we strung the flowers onto cotton twine to make leis, (through the center of the flowers, not the stem end, which she told me tends to grab the needle), Kara played hula music to start tuning my ear to the kinds of melodies we’d be dancing to in a few minutes.

When I first visited Hawaii two years ago, I thought it was going to be just another tropical paradise. What I didn’t know then was how deeply the culture here would seduce me. I heard my first Hawaiian music within hours of landing, and though you might have heard it in a movie there’s nothing to describe how the gentle licks of steel guitar and ukulele wash over you when the sky is golden with the sun’s last light and the air is a breezy seventy-seven degrees. It was the sound of every knotted, winter-braced muscle in my body easing. It was as if every song was composed by someone with a smile on their face.

The language was the next thing to hook me. People always look at me strangely when they ask what the best part of Hawaii is and I say the language. After all, I don’t even speak it. But from street signs to business names to the conversation of kama‘aina  (locals), the place is full of lilting syllables, arranged in charming sequences. Lilikoi (passion fruit), mahalo (thank you), mele kalikimaka (Merry Christmas), Haleakala (a Maui volcano, literally “house of the sun”), kakahiaka (morning): the words feel like they have song embedded in them. I’m not a linguist, but I think it might have to do with the fact that Hawaiian has only seven consonants (h, k, l, m, n, p, and w), and that consonants are always followed by vowels — the constraints seem to give the words a light, joyful rhythm that makes the tongue dance along the palate. I find the words so fun to say, that I unconsciously find myself speaking the street names out loud as we drive around the islands. Kaiwahine, Piilani, Kanakanui, Hoohalahala. I don’t know what effect it might have on the mind to be steeped in this language, but for me it seems to speak (or sing!) directly to my inner child.

And then there’s hula. I had always thought of hula as kind of a cheeseball art, the stuff of Elvis movies and bad postcards, and dashboard ornaments favored by a particularly seedy sort of truck driver. But after seeing it performed a few times, I started to realize that the movements of hula, like the music and the language, are a part of the whole languid, watery Hawaiian culture. The slow, hippy movements and wave-like arm gestures seem to come right out of the sea. So I was curious to try it and see if it felt as joyful as it looked.

We covered footwork first, the basic side-to-side kaholo, the front-and-back lele, and hip-swiveling ‘ami. Every movement is sinuous, curved. It’s a little sexy (certainly the missionaries thought so when they came to Hawaii in the 1800s, and insisted that hula be performed in high-necked dresses with long sleeves) but it’s also playful. I’ve written before about how curves are the language of play, how both children and animals use curved movements to signal and invite play. What I hadn’t thought about then is how much curved movements make you feel playful when you do them. It keeps the mood light, and makes it ok to be silly.

Which is good because I definitely felt a little silly doing some of the arm movements at first. Going into the lesson I thought the arms were just another set of moves to learn, but in fact they’re a whole language of their own, translating the story of the song through the body. Kara showed me how to listen to the songs for cues to the moves: when to make the sign of the fish, when to swirl my arms like fishing nets, how to make a mountain with my arms, and the graceful sweep to the side that indicates “a place.” Much more than a dance, hula is like a physical history of the islands, of gods and myths, of the aina (land) and the ohana (families) that make this place what it is.

Compared to Kara, whose movements seemed to flow as if guided by the ever-present island breezes, I felt gawky, my limbs too angular, my transitions too jerky. At first I found myself constantly thinking about the next movement, but when I stopped focusing so hard, I found it was actually easier to get into the flow. The real test, though, was the video I took to keep a record of the movements and stories so I could try them again on my own. I played it back after Kara left to see how it had come out. The video is terrible, partially silhouetted and at a funny angle. I’m with the beat only about half the time, and I was about as gawky as I’d thought I was. But the real story was on my face: I was grinning the whole time.

I’m interested in the idea that some cultures seem to naturally exude joy. I believe we’re all born with the same innate potential for joy, the same impulses towards it. But in certain cultures, joy seems to be more accessible. It lies closer to the surface, and is absorbed into the customs, language, rituals. Warm weather cultures seem to have a joyful edge, perhaps because of the abundance of sunshine, the vibrant landscape, the proximity to nature. And island cultures also seem to have a joyful quality, whether tropical or temperate. Isolated from the land, islands seem to have their own rules, their own freedoms. Though the mainland is a quick flight or ferry ride away, the watery channel in between creates a psychological oasis. Put together island and warm weather cultures, and you find a common thread between so many vacation destinations: the Caribbean islands, the Bahamas, Jamaica, Barbados, Polynesia… When we take a break from our everyday lives, we want not only sun and sand, but an inescapable pull towards joy.

I think this explains much of Hawaii’s joyfulness, but perhaps not all. There’s something else here too. Perhaps it’s the aloha spirit I wrote about last new year, or something else that underlies all the joyful signs: the curvy hula, the gamboling syllables, the tinkling ukes. When a place puts rainbows on their license plates and uses them as the logos of their banks; when their mailboxes are painted with ocean scenes; when the word for hello and goodbye also means love and affection — then joy must truly run deep. 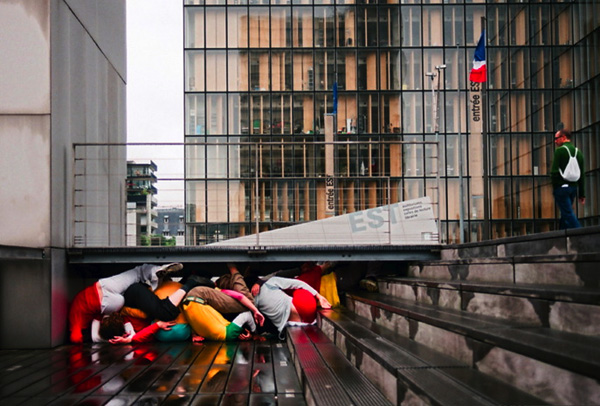 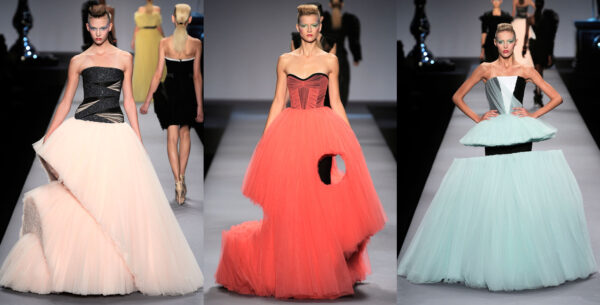