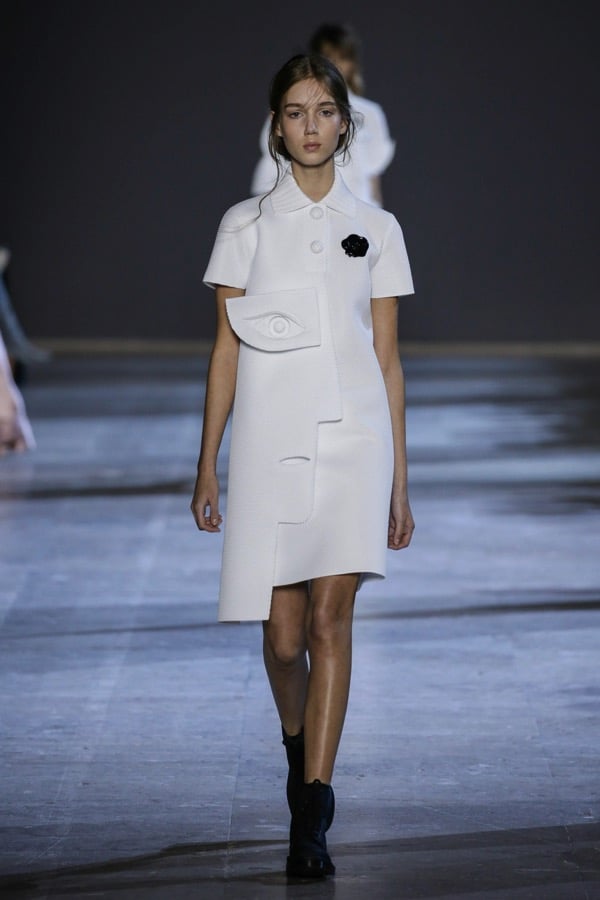 One of the most striking features of humanity is our propensity for turning necessities into pleasures. From our need for shelter, we’ve created wildly divergent styles of architecture. From our need for nourishment, we’ve developed a rich, exciting culinary industry. And from our need to meet and mate, we’ve seen the rise of many arts of courtship: flirtation, kissing, and swiping left and right.

Fashion is perhaps the most lush and extravagant example of this phenomenon. Being hairless apes, it’s a given that we’ll need to cover our bare skin with something. But the creativity and cleverness devoted to garments that are rarely affordable and even less wearable is intriguing. At the far edges of any aesthetic endeavor, be it food or fashion or something else, there is a sense that the medium is just a jumping off point from which to swim out beyond the shores of pragmatism and into wide-open waters of possibility. At which point the concerns of wearability or edibility or habitability are irrelevant. But fashion designers seem to be particularly adept swimmers.

All of which is an overblown way of saying that I don’t much mind that Victor & Rolf’s clothes never seem like something I could actually wear, because the Dutch duo tends to bring such joy to the art of thinking them up. I often complain on this blog that fashion, a pursuit of such wonderful fluffiness and frivolity, always seems to be presented so seriously. (Heaven forbid that a model should crack a smile on her way down a catwalk. She might be banished from the industry for life!) But Viktor & Rolf bring a playful exuberance to the clothes that undercuts the seriousness of fashion week and at the same time shows how fashion can cross the line from clothing to art. 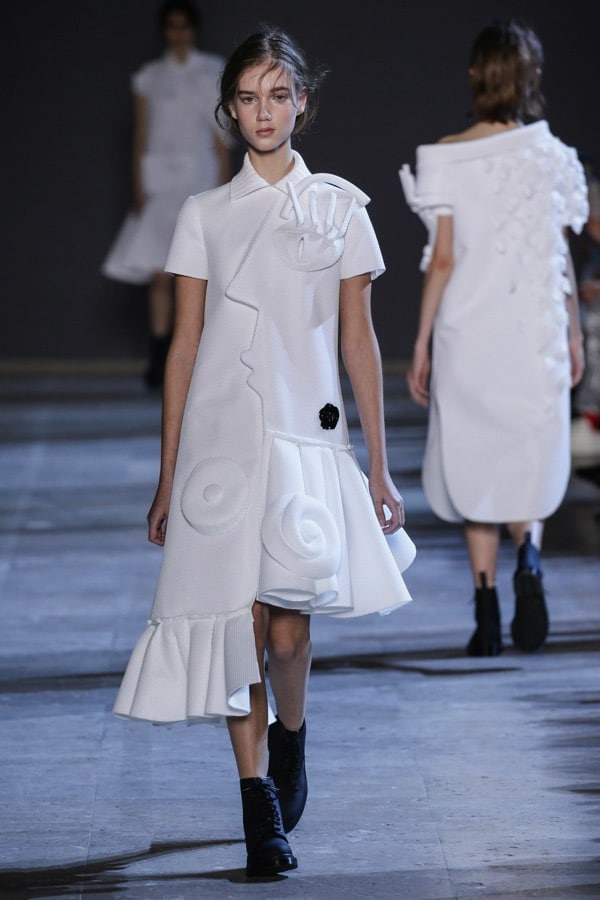 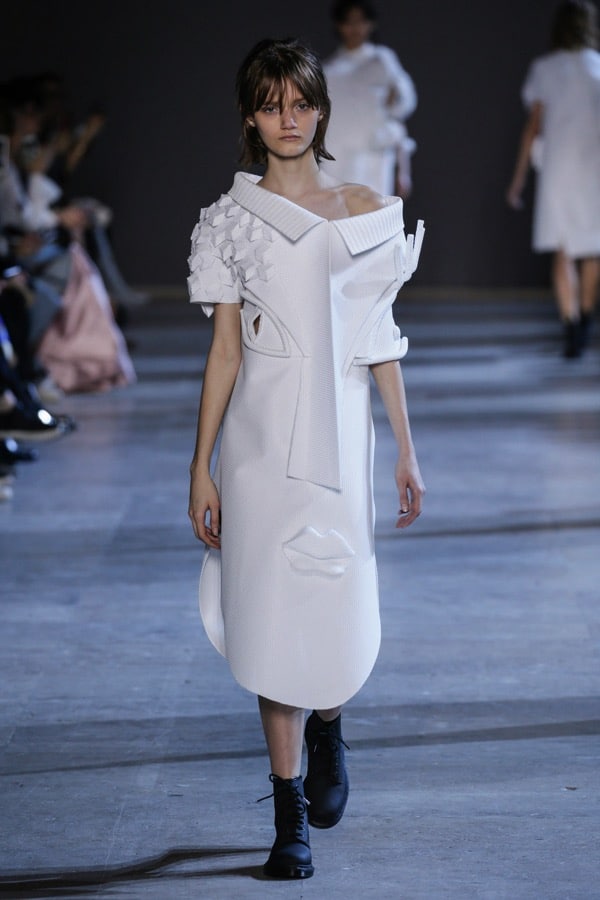 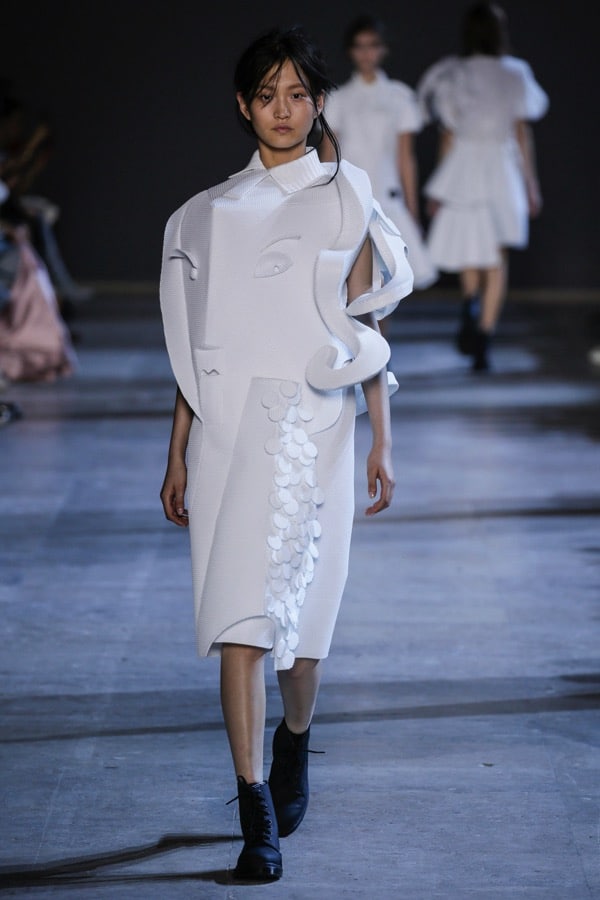 This collection, for Spring-Summer 2016, is the first since the fashion house decided to drop its ready-to-wear lines to focus on couture. The inspiration is Cubism, and the influence of Picasso in particular is apparent. The dresses start out tame enough: a little white polo dress with the profile of a face down the front, an eye pressed into relief pasted on top. But as the show progresses they become increasingly sculptural, with giant fans or swirls of fabric resembling hair obscuring the faces of the models, and then huge abstracted faces covering over the faces of the models completely. Instead of dresses, they become sculptures walking around on human legs.

I love these designs, and yet I understand how some might not find them joyful. Cubism has a violence to it, it disrupts the harmony of a symmetrical face, and turned into garments, it severely distorts the symmetry of a healthy body. In some ways, it is grotesque. At the same time, it tells a story of the relationship between the senses and the mind, rendering the image not as it is seen but as it is felt. For example, the human brain devotes far more energy to searching for and analyzing faces than the rest of the human body. The giant faces seem to me to amplify the significance of the face in line with the way the human brain naturally perceives it. The faces become avatars of the girls themselves.

Viktor & Rolf often choose to walk the line between discomfort and joy. My previous favorite collection of theirs was full of tulle ballgowns that looked as though they had been hacked into with a chainsaw. I know that sounds violent, but the bright candy colors and fluffy skirts compensated for the hard edges, making for a pretty delightful vision. Looking back, it strikes me that that collection launched in the wake of the recession, when we were all feeling a hollowed out by the unforeseen loss. Meanwhile, this current collection appears at a time when violence is surging, breaking into once-peaceful places, rupturing the frameworks that help us understand our place in the world and how to move through it. Which makes me think of Picasso’s own words: “The world doesn’t make sense, so why should I paint pictures that do?” Perhaps distortion is a way to flow with the anxiety, a way to signal that in tough times we bend but do not break.

Or another way to look at it: if clothing is the layer between our vulnerable nakedness and the world, perhaps uncertain times call for a bit more volume, a buffer of space between ourselves and the rest of the world, and some masks to hide behind. That could (and often does) manifest as spiky, metallic armor. Given that, ruffles and curves and faces seem like a far more joyful way in. And many of the details are charming: the stick-like eyelashes that make the eyes seem so alert; the abstracted breasts, one shaped like a cinnamon roll, sitting by the model’s knees; the curlicues of hair, particularly the one on the round-faced piece that looks like the corkscrew of a piglet’s tail. Done all in white, there is a sweetness that modulates the distortion of these Cubist forms.

Over to you: Do you find this collection joyful or disturbing? What do you think makes it so? 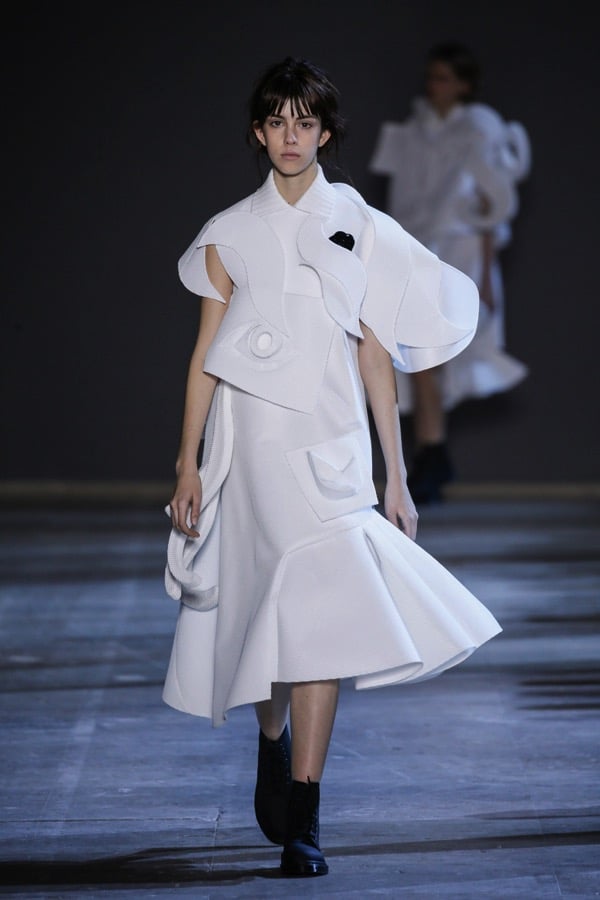 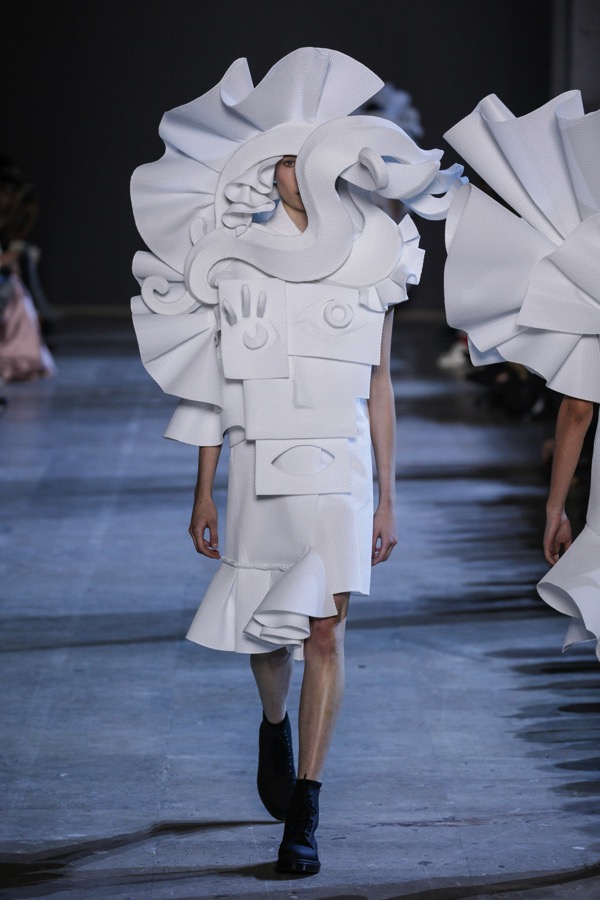 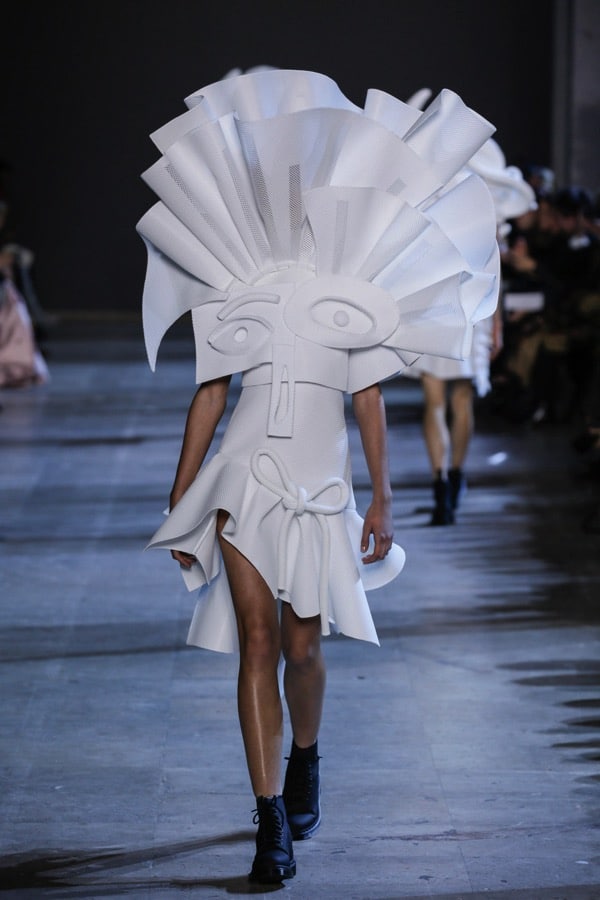 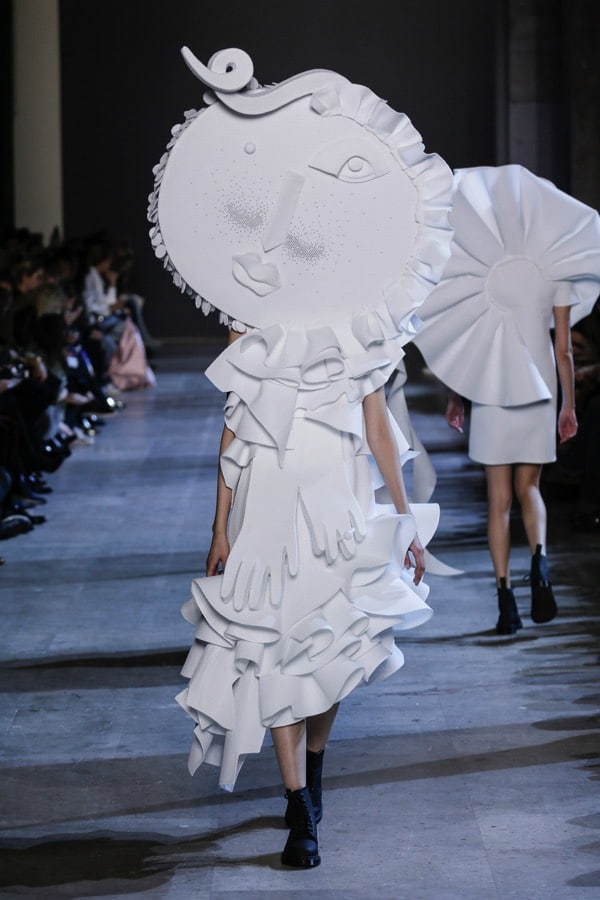 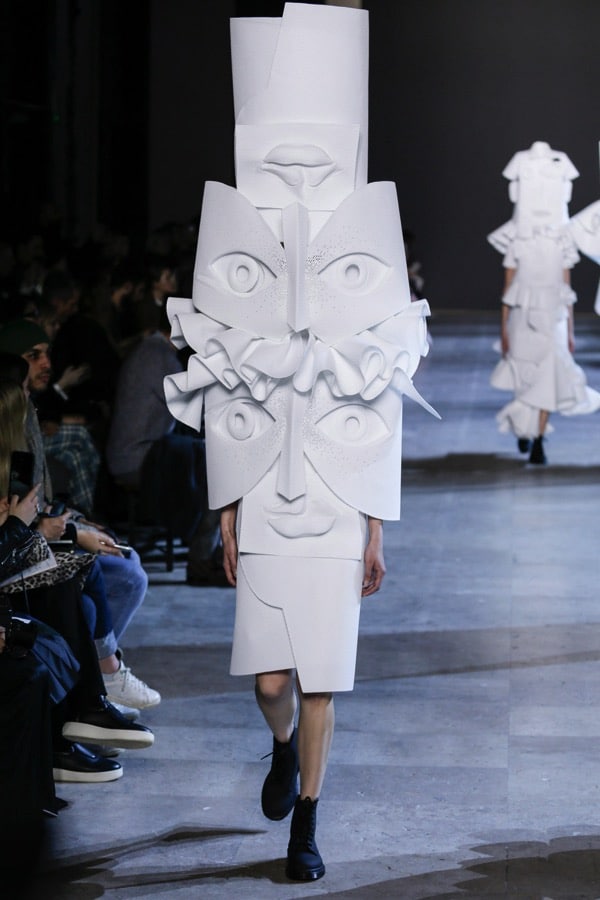 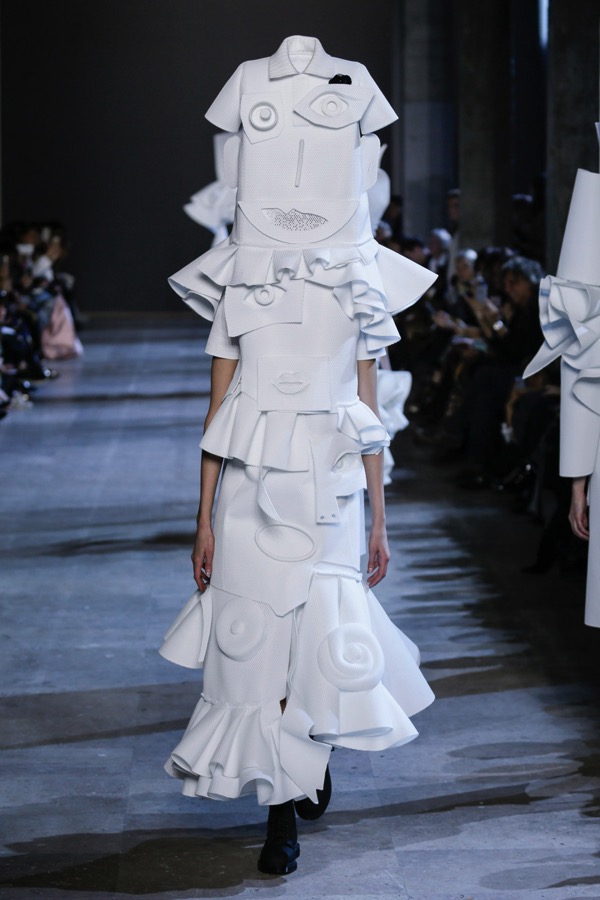 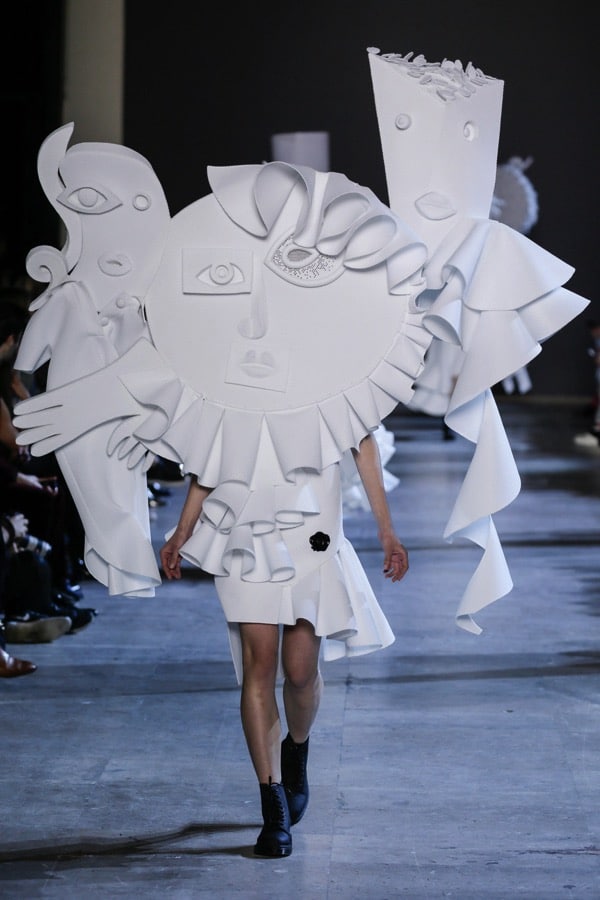