A few weeks ago, I had the joy of interviewing Gretchen Rubin, bestselling author of The Happiness Project, Better than Before, and most recently, Outer Order, Inner Calm. Both Gretchen and I deal with the relationship between physical objects and emotions in our work, and it was fascinating to get her perspective on how we can live better with our things. (If you’d like to watch the full interview, you can do so here.)

In Outer Order, Inner Calm, Gretchen writes, “Sometimes material desires have a spiritual aspect.” I find this to be true, and I also think that learning how to deal with our material things can often help us in our spiritual, emotional, and social lives. Cleaning out a closet can produce a mental lightness that invites in new ideas. Fixing a broken door not only makes it easy to come and go, but eliminates a source of family frustration. Learn how to take care of your things, and you’re also learning how to tend to your life.

After my conversation with Gretchen, three phrases kept reverberating in my brain. Each of them relates to a way of managing our relationship with our things, but in fact tells us just as much about how to live joyfully, whether material things are involved or not.

“How do we deal with other people’s things,” I asked Gretchen, “especially things we don’t particularly like?” The list of things that falls into this category might include a partner’s ratty t-shirt or their favorite chair, which just happens to be in your least favorite color. It might include kids’ stuff, such as an abundance of toys given by well-intentioned grandparents.

There are practical tricks to dealing with other people’s stuff, such as having closed storage if your family is clutter-prone, so that you can easily stash things out of sight, or hanging pegs in a hallway so that it’s effortless for people to hang their things instead of leaving them all over the apartment. But when you’ve reached the limits of practical fixes, Gretchen suggests a simple phrase: “Remember love.”

“All this junk is an expression of love,” she says. You have the toys because you love your kids, and your friends and parents do too. You have the ratty shirt and the ugly chair because you have a partner you love, (even if you don’t always agree with their taste). The people we love bring mess and disorder and different opinions into our lives. It can be frustrating when our divergent preferences rub up against each other, but at the heart of it, we have all this frustration because we have all this love.

If you find yourself really frustrated by someone else’s stuff, it’s worth taking a moment to imagine your life without that person in it. You wouldn’t have the stuff, but you wouldn’t have all the joy and love they bring into your life. If we remember love, then it’s a little bit easier to overlook these minor irritations.

I also think that there’s something powerful in shifting our attention to love in a moment of anger. Our bodies are flooding with chemicals of anger and annoyance and suddenly we inject a dose of affection. I don’t know if we can rewire our brains to view these objects more with love than frustration, but I don’t think it can hurt to practice softening the edges of our anger with affection.

One of the things I was eager to ask Gretchen about was inherited objects. Sometimes we get things passed down to us and we don’t want them, yet feel obligated to keep them. Other times, we receive things that seem so precious that we’re afraid to use them. When I mentioned this, Gretchen shared the following story:

“The most poignant example of this was a woman who said to me that her mother had died and when she was cleaning out her house she found a set of very elegant fancy china. She realized that her mother had saved this china for a special occasion and yet in her whole memory there had never been an occasion special enough to use the china. She had never seen it used. So now she says she uses that china every single day.”

I think a lot of us can relate to the feeling of having something so special that we’re afraid to use it. I remember a pair of burgundy leather boots that my dad bought me when I was a kid. I loved those boots so much that I wanted to keep them in mint condition, so I put them in the closet and would just open it every now and then to look at them. Then one day I tried to put them on, but they didn’t fit. My feet had grown. I was crushed.

To avoid this, Gretchen has a principle she puts into use in her own life. “Spend out,” she says. “Put things into use, don’t hold things back.” I think holding back can be a real survival behavior. I’ve often seen it with people who have faced economic hardship (or had parents who did), where there’s a fear of using something and then not having it when you really need it. But we tend to forget our desires are always changing, and often, when we put something on the shelf because we don’t want to mess it up or use it up, we come back a few years later to find it’s not what we want now. The notion of spending out is very much aligned with the idea that joy lives in moments, and that instead of only living for the future, we need to give ourselves permission to enjoy the present.

The tendency to hold back can also be a sign of a scarcity mindset that affects other areas of life. Gretchen talks about this as it relates to creativity: “Creatively, there’s this urge to hold certain things back, to think ‘I need to save this for later, I can’t pour everything out now because then I’ll be depleted and then what will I do?’ But what you realize with creativity is that you’re much more likely to be creative if you’re pouring it out than if you’re doling it out with a teaspoon.” The same is true of compliments, gratitude, and affection: the more we share and release into the world, the more we have to go around.

There are few things more detrimental to joy than the perception of scarcity. Researchers have found that scarcity creates a kind of tunnel vision that leads us to make poor decisions. (This is one reason why poverty is so hard to get out of: the pressure of living under scarcity actually clouds decision-making, impeding people’s ability to save and make progress.) The principle “spend out” reminds us to live life with an abundance mindset. We don’t have to hoard our moments of joy, but rather we can trust that we’ll be able to make more of them when we need to.

Sometimes we face difficult decisions around the things in our lives. Should we get rid of a cherished heirloom that’s taking up too much space? Should we move to a different city, which might require downsizing a lot of our belongings? When faced with such conundrums, Gretchen has a question she often comes back to: “Which one would be the bigger life?”

In her case, it was a dog that prompted such reflection. Her family wanted one, but she worried about the time and attention it would take to care for a dog. A dog might be fun, but it also had its fair share of hassles. On balance, it seems like a stalemate, and it would be easy to get stuck in a decision like this.

As Gretchen says, “A lot of times the pros and cons will be very well-matched, but then if you say ‘Choose the bigger life,’ one answer will jump out as clearly the bigger life.” In her case, the bigger life meant getting the dog. But she’s quick to point out that this might be different for someone else. If you love to travel, for example, a dog might pin you down, whereas being free to roam the world at a moment’s notice might be your version of a bigger life.

(As I’ve shared this idea in conversations, I’ve learned that the word bigger can be confusing for some people. If that’s you, you might try “choose the richer life” or another word that makes sense to you.)

Choose the bigger life zooms us out, putting our choices into broader context. We think less about the small annoyances, and more about how our choice will contribute to the joy in our lives. Gretchen says, “Choose the bigger life is a very helpful way to think about what is it that I want from the future.” I think it’s especially useful when choosing whether to let something go. It’s hard in the moment to think about letting go of something that is just barely meeting our needs (whether that’s a thing, a relationship, or even a belief) for the uncertain possibility of something better. The safety of what we know can be hard to give up, but when we think about the bigger life, it’s easier to leave that safety behind to make space for more joyful possibilities to arise.

This post was inspired by my conversation with Gretchen Rubin as part of the Joy Makeover, a free two-week program that includes interviews with eleven experts and a 25-page downloadable workbook, designed to help you transform every aspect of your life for joy. Sign up and watch for free here. 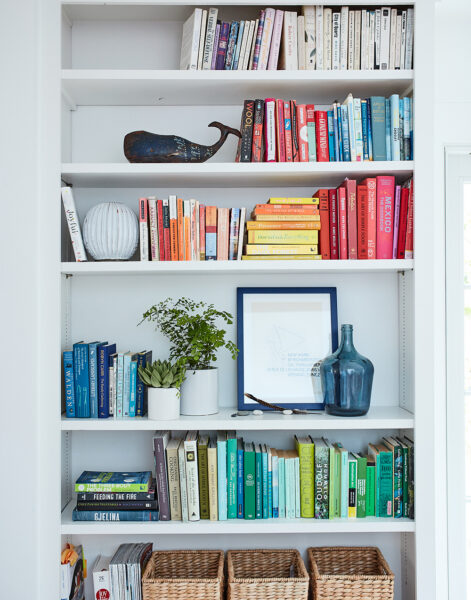