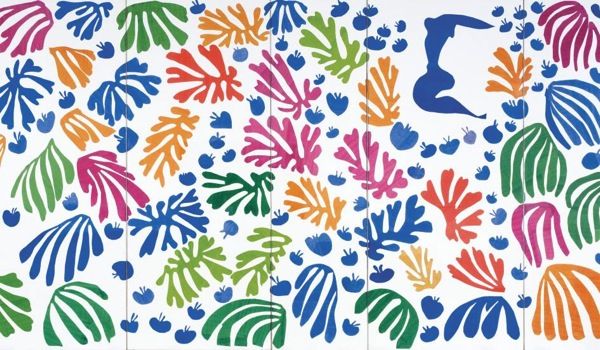 I took off a few days last week for a writing holiday, but I couldn’t go back to work without taking a little inspiration jaunt to this exhibit of Henri Matisse’s cutouts at MoMA. Has there ever been a more exuberantly joyful artist than Matisse? I find my whole energy seems to change when I walk into a gallery of his vibrant, animated work. 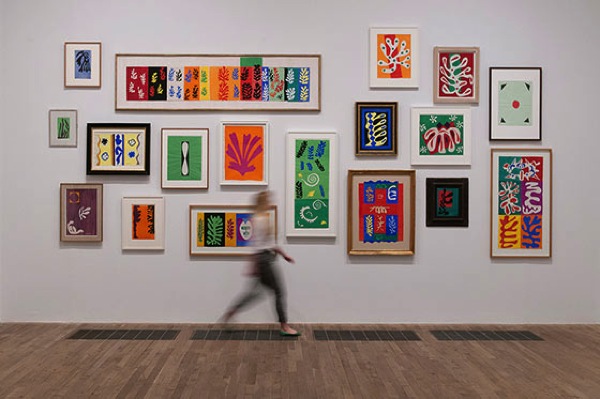 The cutouts are especially joyful because they pare back the elements involved. With paintings, there’s perspective and light, texture and narrative. But with the cutouts, it’s a pure, liberating experience of just form and color. They are bold and immediate, as if because they are simpler, they take a more direct route to the unconscious. In fact, they seem to be the culmination of a lifelong quest to bring together color and contour. From the curators:

Throughout his career, Matisse searched for a way to unite the formal elements of color and line. On the one hand, he was known as a master colorist: from the non-realistic palette that earned him the designation of a fauve or “wild beast” in the first decade of the twentieth century, to the light-infused interiors of his so-called “Nice period” of the 1920s, he followed a course of what he described as “construction by means of color.” On the other hand, he was a master draftsman, celebrated for drawings and prints that describe a figure in fluid arabesque lines; “my line drawing is the purest and most direct translation of my emotion,” he once said. Through the cut-outs, he was finally able to unite these two branches of his practice.

I resonate to this: sometimes a simple line, which emerges as an extension of the whole body, can have more feeling than a complete composition.

Sometimes when I visit an exhibit, I find myself zooming in on one feature. I become almost obsessed—I tune out many gorgeous works because I’m captivated by one particular element. Last week, my fixation landed on this wonderful leaf form that recurs over and over in Matisse’s cutouts. The shape has a few different variations. There is a pinnate form that looks like an exaggerated white oak leaf, and a more palmate shape that resembles a stag horn fern. Others look looser, like the wavy blades of sea kelp.

All of them are wonderful because of their curved surfaces and the interaction they create between the forms and the white space around them. They corrugate the space, aerating it and giving it movement and energy. This effect is even more dramatic when the color contrasts are so pronounced, as with this Violet Leaf on an Orange Background, below. 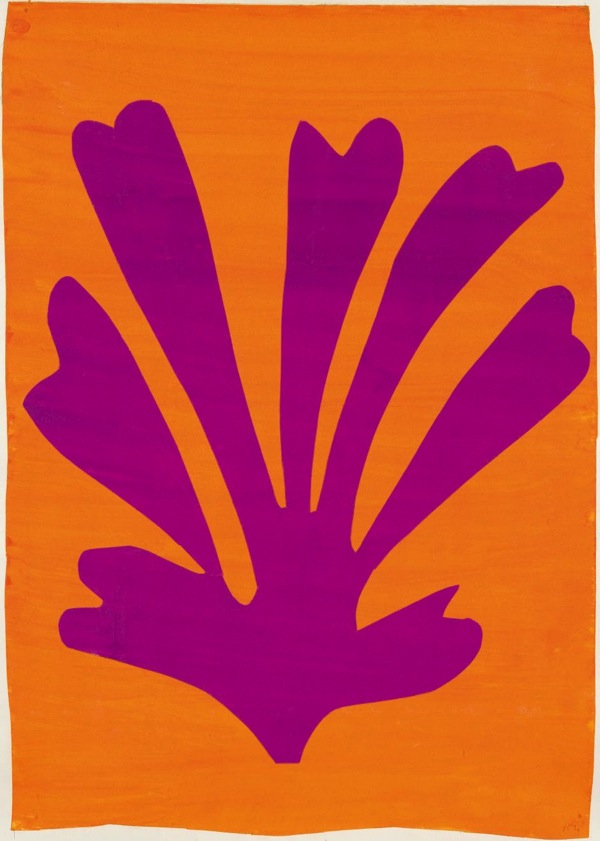 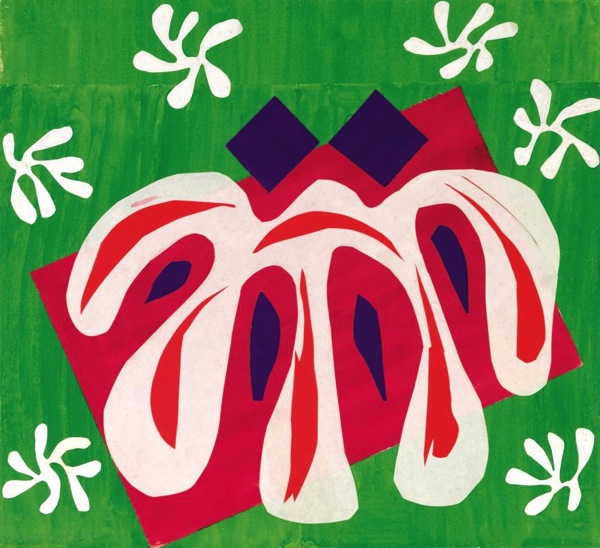 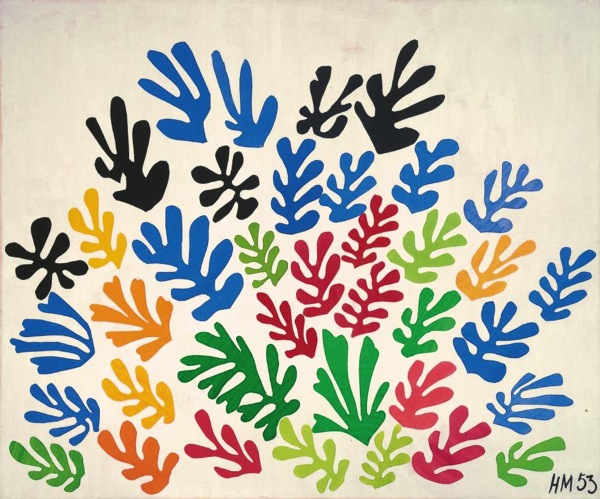 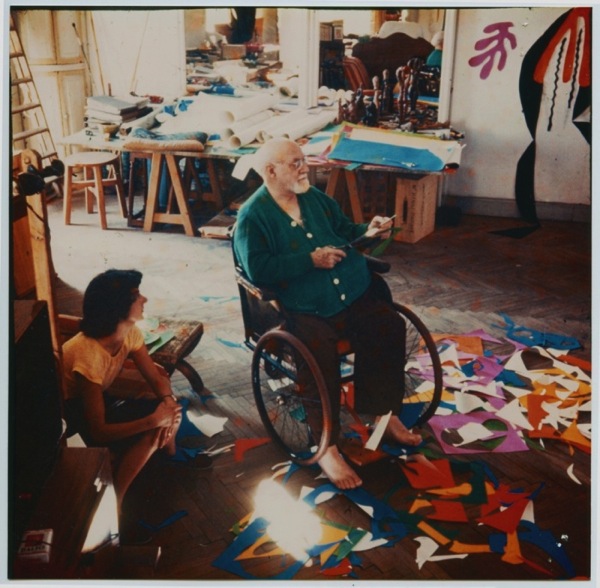 Matisse produced the cutouts late in life, and I love this image of him with all of the clippings at his feet. He often worked on compositions large-scale across the walls of his studio, literally surrounding himself with these vibrant forms. As his mobility was decreasing, it seemed to give him a way to stretch out. He built The Swimming Pool after a day spent watching divers at a nearby pool, to bring the water into his studio. He said, “I will make myself my own pool,” and ringed an entire room at the Hotel Regina in Nice with splashing, paddling forms. When building The Parakeet and The Mermaid, he worked across two walls of his Nice studio. The curators note:

Spreading from left to right, without regard for the presence of a radiator, the vibrantly colored forms created an immersive environment. “I have made a little garden all around me where I can walk,” Matisse noted, “There are leaves, fruits, a bird.”

What I love most about the story of this work is that as he neared death, Matisse reached out and brought the joys of life closer to him. And in such a beautiful way. If you’ll be in New York before February 8th, I highly recommend a field trip to see it in person. If not, definitely check out the well-done microsite for the exhibit, and let me know what you think about the cutouts in the comments! 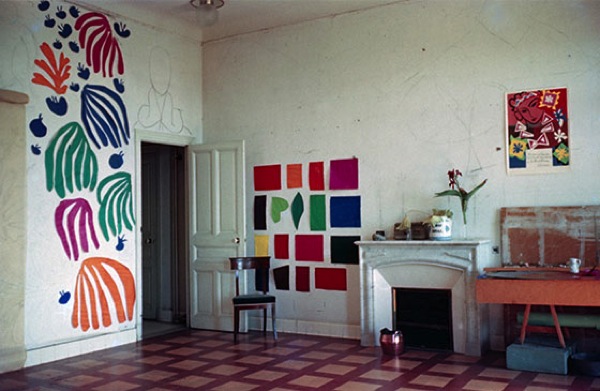 Link: “Henri Matisse: The Cutouts” at MoMA until February 8th, 2015.
Images (top to bottom): The Parakeet and the Mermaid, 1952, via. A view of the exhibit when it showed at the Tate Modern, via the MoMA exhibit microsite. Composition Green Background (Composition fond vert), 1947, via.Violet Leaf on an Orange Background (Palmette) 1947. Two Masks (The Tomato), 1947, via. The Sheaf, 1953, via. Henri Matisse in his studio, photographed by Lydia Delectorskaya, via. The development of the Parakeet and the Mermaid in Matisse’s Nice studio, via the MoMA exhibit microsite. 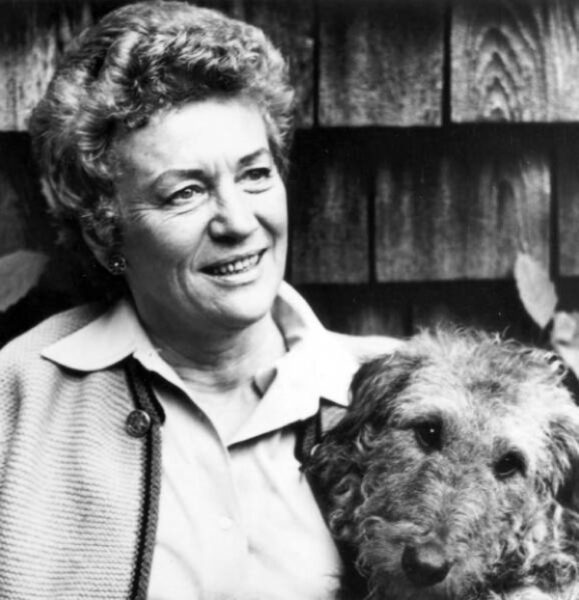 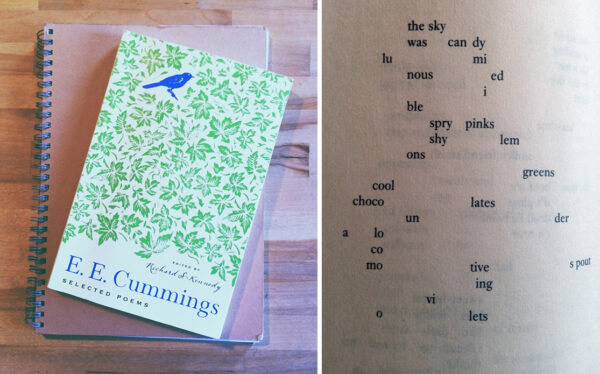 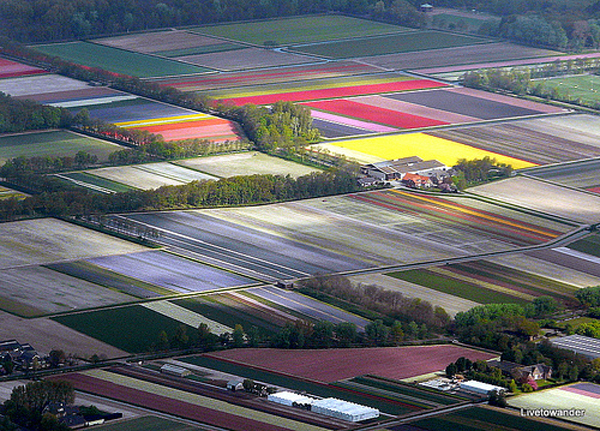